Why planet Earth is fighting an infinity food war

At the weekend my 12 year old son wanted to go and watch the new Avengers Movie – Infinity War.  I drew the short straw to go  along as his adult supervision (it’s a 12A).   I’m not really a Marvel/DC fan so it was a long three hours of my life!

If you don’t want me to spoil the story line for Avengers Infinity War or Dan Brown’s Inferno then please skip the next paragraph. 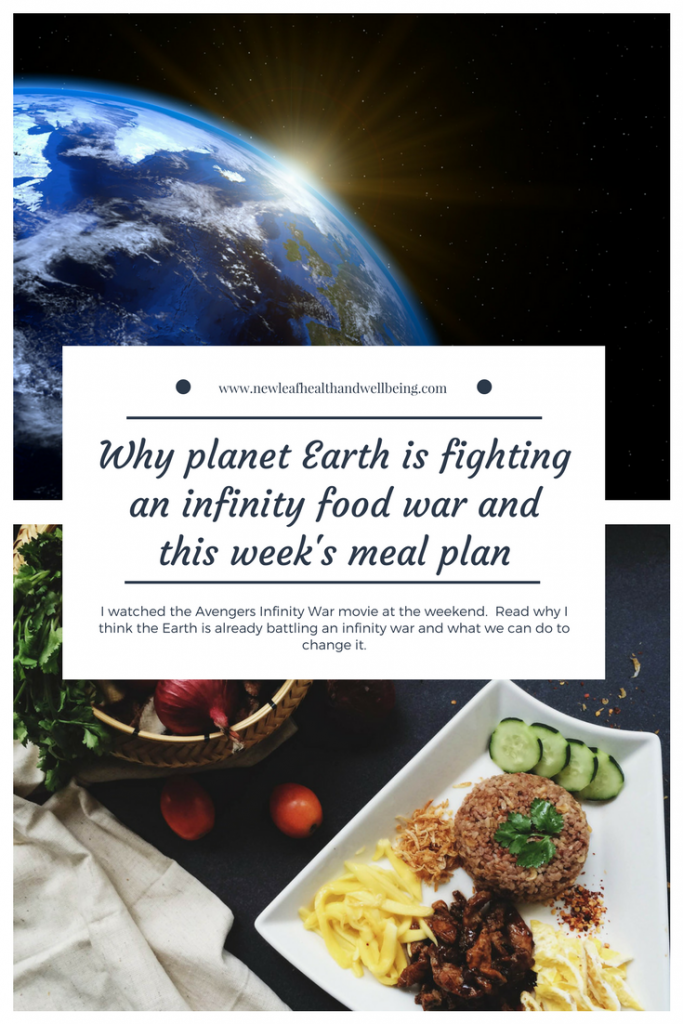 The basic outline of the story in the Avengers movie is that Thanos, the ‘badie’ thinks the only way to stop suffering and poverty in the universe is to randomly sacrifice half the population, so that the survivors will have a better life.  He sets off on a quest to collect five magical crystals to give him the ultimate power to achieve his ends.  Likewise in Dan Brown’s Inferno, the ‘badie’ devises a virus to randomly kill off half the population to achieve the same outcome.

It’s safe to read this bit!

If you start looking at the health statistics for the human population it’s hard not to feel we are already fighting an infinity war.  Rates for obesity, Type II Diabetes, Alzheimers/Dementia and heart disease are all escalating at frightening levels.  Increasingly, the root cause of these epidemics is linked to our food and lifestyle choices.

This is the UK’s second biggest killer after dementia.  It’s a disease that kills more than 1 in 4 people in the UK.  Some forms of heart disease are congenital or genetic, but again many forms are directly linked to  lifestyle choices.

Risk factors for cardiovascular disease are high blood pressure, high blood cholesterol and diabetes. The lifestyle factors that contribute to CVD are smoking, being overweight or obese and being inactive.  A recent Harvard Medical School study goes one step further and says that giving up meat could save up to 200,000 lives.

“24% of UK men and 26% of UK women are obese, placing us at the second highest rate in the world”

Obesity claims over 30,000 deaths a year with 9,000 of those deaths in people before retirement age.

The best ways to prevent obesity is to get more exercise and make changes to our diet.   2 out of 5 adults do not achieve the recommended levels of physical activity and only ¼ of adults and 1 in 6 children in England and Scotland consume the recommended minimum 5 portions of fruit and vegetables per days.

In addition, around ¼ adults in the UK exceed the National guideline for weekly alcohol intake.

“Currently 1 in 16 people has diabetes”

90% of the cases of diabetes are Type II diabetes which is linked to lifestyle choices.

All of these conditions can bring about the randomised death of our friends and families in just the same way as the storylines in popular disaster movies.

Human beings need to wake up to the fact that our health is being attacked every day by the choices we make.

It’s said the average adult makes up to 200 food choices per day.  Many of these choices are influenced by industrial food producers who have an arsenal of weapons to make us pick their foods – intensive marketing and  products designed to trick our brains into craving them and becoming addicted to them.

Whilst some may argue that the Government should step in and control the food industry more, the basic fact is that if we want to protect ourselves and our families we need to do much more to educate ourselves to make better choices.   If you were a character fighting in a disaster movie, you would find out as much as you could about your enemy right?  You would also want to find out your enemies’ weaknesses.  With the food industry it’s their profits – stop buying the over processed foods, then they will have to change.

However, I fully realise how over whelming the whole healthy eating movement can be and I also believe it’s impossible to jump straight into being super healthy.  We have to train our bodies and minds to accept new habits and routines and this takes time.   I know I have a long way to go – there is still far too much sugar in our house!

My recommendations to anyone wanting to make changes in their lifestyle choices: –

In our modern world battling the demons of sugar, fat, processed foods and over eating is really tough.  Just remember you don’t need to be perfect but just start making consistent changes and try to get the whole family on board with you. Together we can beat the infinity food war!

I hope you all have a wonderful week.

Let me know in the comments or on the New Leaf Facebook page whether you feel under attack by food and the food industry.

Also don’t forget you can sign up for the New Leaf Newsletter to receive regular updates from our blog.